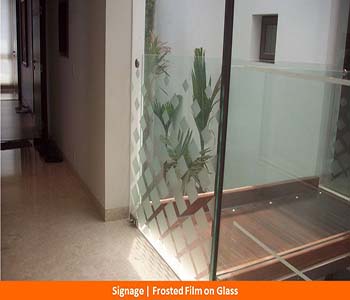 It is a style-statement by itself.  A coat of frosted film on the glass panel of a door, window or room-separator converts it into a piece of art.  The range of intricate designs and colours available have made frosted film a much sought-after product.

Homes and establishments with glass exteriors use frosted film on glass to protect their interiors from UV rays and fading.

Frosted Film is also used for lettering on glass in office interiors.

Please fill our short form and one of our friendly team members will contact you back.